Cobb Sheriff unveils medical tracking device for ‘at risk’ inmates, plans to expand to all inmates 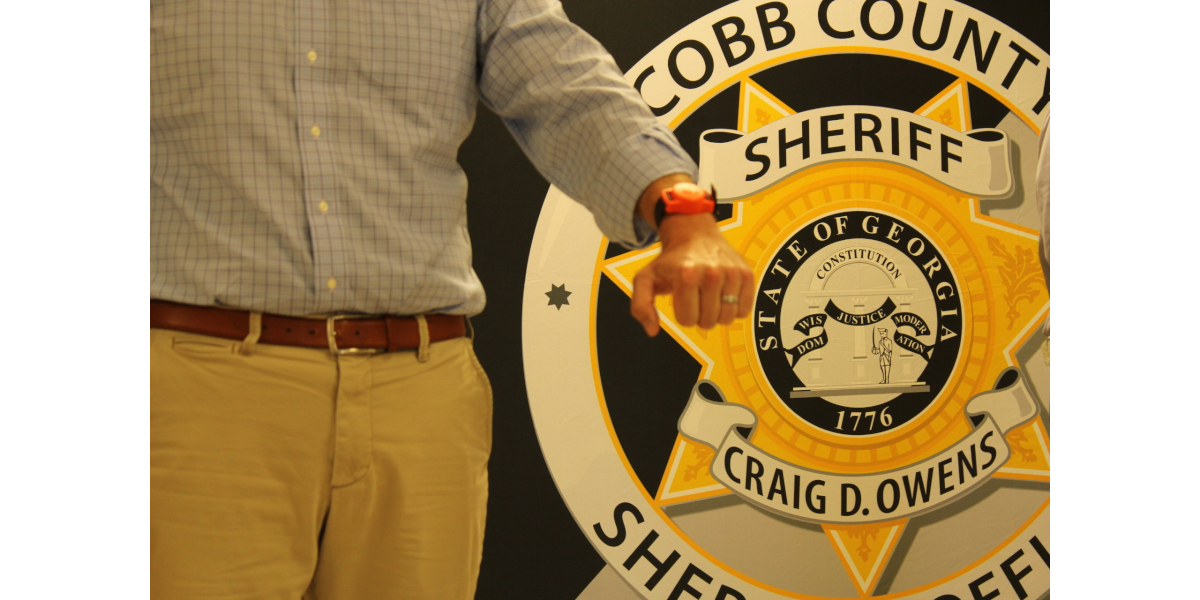 In this initial phase, wristbands will be provided to “at risk” inmates in the prison infirmary.

The devices will monitor heart rate, which can indicate if a person is in distress.

The wrist device sends an “identified” radio signal every two seconds and an alarm sounds within 15-30 seconds if the device is removed.

Officers and prison staff will also be given duress buttons which they attach to their belts and send an alert if they are in distress.

A brochure about TSI Prism explains that the device is capable of automatically sounding the alarm when an officer is down as well as finding their location and the names of inmates in the vicinity when they have fallen.

A computer screen shows the location and identity of inmates and officers.

The next phase of implementation will include extending the device to all inmates. Every inmate entering the facility would be required to wear one. The Cobb ADC holds up to 3,000 inmates.

The device will be able to track inmates with one to two meter accuracy anywhere in the facility at any time and provide location history, Black Creek President Isaac Newton said.

Location history would be stored every few seconds.

“[The wrist-mounted device] is a very lightweight device, it has an extended battery life,” Newton said. “It’s designed to be waterproof and it’s designed to be used in a correctional environment. It is attached to the wrist with a special clasp that requires a tool both to install and to release and the most important feature of this technology – it is just under half the price of the previous technology.

The bracelet-shaped device will cost $100 each.

Owens said his office is looking at different grants and funding options that would keep the costs down for taxpayers.

“What [the sheriff] negotiated is that we won’t pay a dime until the sheriff is happy with this particular piece of equipment,” Col. Temetris “Pete” Atkins said. “So if that doesn’t work out, Black Creek said they’d just take their stuff back to Alabama.”

Newton said Alabama-based Black Creek had similar technology in the past, but it was flawed. The technology shown on Tuesday is a newer and updated model.

The Cobb Sheriff’s Office will be the first in the country to use the new wrist device for inmates, officials said.

Newton said Black Creek has worked with various correctional facilities for over 30 years.

Newton also demonstrated a tracking device with the same technology as other devices that attach to objects, such as a knife, weapons, or key ring.

If something like a knife was removed from the kitchen, an alarm would go off.

“For example, a person who is vaccinated against a person who is not vaccinated against COVID. If those two inmates get close to each other, we get an alert, which also allows us to do contact tracing with that system. It is a versatile system designed to help with the operation of the installation, increase the level of security and reduce the workload of the agents, so these are our objectives.

Owens said technology can help make up for understaffing in the prison.

Newton has also spoken about the effectiveness of similar technology from Black Creek in the past.

But the elephant in the room was how these tracking devices relate to the deaths that continued to occur in the prison.

Six people have died in prison since Owens took office in January 2021, three of which occurred in May 2022 alone.

Owens confirmed on Tuesday that two female inmates have committed suicide this year while one did not wake from her sleep.

The sheriff estimated that more than 70% of those incarcerated have mental health issues – if that number is not higher.

“No sheriff’s office across the state — we’re not mental health professionals — that’s not what we do,” Owens said. “We are correctional, and we are here to hold them until they have their day in court. I’m not here to provide mental health services, but that’s what turned out to be.

Incarcerated people dying at the Cobb ADC is nothing new, as 51 people died there in the roughly 16 years that Owens’ predecessor, Neil Warren, was sheriff. A number of these deaths have occurred in people with mental health conditions.

When Owens took office, he pledged to improve mental health services for inmates.

In October, Owens announced 24/7 mental health services for those incarcerated, with a focus on suicide prevention and substance abuse help. Cobb was the first county in Georgia to create such a program.

Owens has also set up a program for incarcerated fathers as well as anger management classes.

Yet, as Newton pointed out, suicide is the leading cause of death in prisons, and inmate deaths are on the rise.

A Bureau of Justice Statistics study shows that in 2018, 1,120 inmates died in local jails. This is the highest number of deaths in local prisons since the BJS began collecting such data in 2000.

The same study shows that in 2018, suicide was the leading cause of death in local prisons. Nearly 30% of deaths were suicides.

“Suicide in prison tends to happen quickly: half of all those who died by suicide between 2000 and 2018 had been in prison for 9 days or less – compared to a median stay of 17 days for all causes of death. A short stint in prison can be extremely damaging, a fact that even our country’s top officials acknowledge, noting that “certain features of the prison environment promote suicidal behavior.” For suicides and drug- or alcohol-related deaths, the first days in prison are the deadliest.

“On these at-risk inmates, if we can catch them at a time of vulnerability and intercede [and] take action to protect the health of this inmate, we are going to be able to take positive action to reduce deaths in custody,” Newton said.

Owens clarified that this new technology is not being implemented in light of recent deaths. Rather, it’s a project the sheriff’s office has been working on since Owens took office.

Owens said it’s hard to say whether these devices could have prevented the suicides that have already occurred.

“We’ve had six unfortunate incidents of death at our facility – and I’m not proud of that,” Owens said. “But if you look around metro Atlanta, we’re no different. I don’t want a death. One death is too many, but when people inflict acts and want to hurt themselves, it is very difficult for us to try to prevent that.

“We have put all the precautions in place. We bought new suicide gowns, we bought suicide mattresses, everything you can imagine, we do and spend a lot of money to try to prevent [suicides]. And we will continue to do so. And we hope that this technology – we hope – will help us avoid one.

Arielle Robinson is a student at Kennesaw State University. She is the current president of the academic section of the Society of Professional Journalists and former editor of the KSU Sentinel. She enjoys music, reading poetry and non-fiction books, and collecting books and records. She enjoys all kinds of music and reading poetry and non-fiction books.