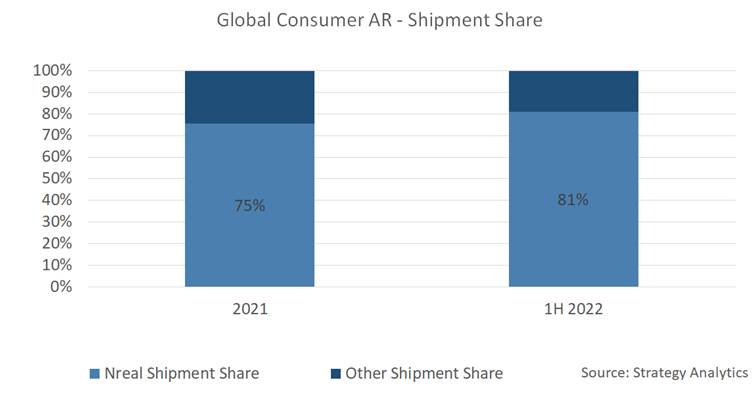 The AR device market has so far been dominated by enterprise devices. Although AR has proven popular with consumers on smartphones with successful apps such as Pokémon GO and Snapchat, consumer devices have yet to reach the mainstream. But there are encouraging signs – Strategy Analytics’ latest report, “Has Consumer AR Finally Happened?” The market triples from 2020 to 2021” shows that the market for consumer AR devices has tripled from 2020 to 2021. Nreal has taken the lead in this space with a 75% share of consumer AR shipments in 2021.

The report’s author, Executive Director David MacQueen, said, “Consumer shipments increased 161% year-over-year from 2020 to 2021. Over the same period, consumer AR revenue growth has outpaced the overall market, growing more than 300% year-over-year. There is a wide range of devices trying to cater to the consumer AR market. However, none achieved more than a single-digit percentage of shipments in 2020 or 2021, with one notable exception. It’s newcomer Nreal who leads the consumer AR market, having found the middle ground for both price ($599) and functionality. A 75% market share of consumer AR shipments in 2021, rising to 81% in 1H 2022, demonstrates Nreal’s success. »

“Nreal is ahead of its competitors with its optical technology. Comparing Nreal Light and Air to over 60 other devices in our dedicated AR device spec tracker, Nreal devices are in the top 16% of devices by display resolution and rank in the top 20% device groups for the field of view (FoV). Nreal’s go-to-market strategy, in partnership with operators, has been another key factor in building the company’s leadership position. The company now has a global reach with 8 carriers in 7 countries, on 3 continents.