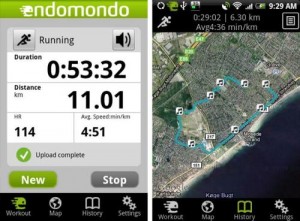 Endomondo, developer of a GPS-enabled sports tracking app, has recorded more than 10 million downloads for its fitness app. As of September, the company had recorded around 5 million downloads for its app, which is available on a multitude of mobile platforms, including iPhone, Android, Blackberry, Symbian, Windows Phone, Windows Mobile and Java phones. Overall, the app works on over 250 mobile phones, making it almost all GPS compatible phones.

The fitness tracker app has an international audience: only about 25% of its user base is in the United States. Around ten percent of its users are in the UK and an additional 10 percent live in Spain. Other users based in Europe represent an additional 35% of app users. Around 75% of app users are men, but the number of women downloading the app has increased over the past year. There has been an 8 percentage point increase in the number of female users over the past year, the company said.

Endomondo shared a host of metrics as part of its milestone announcement of 10 million downloads. More in the press release below:

SAN FRANCISCO, CA – June 27, 2012 – The Endomondo Sports Tracker mobile fitness app has hit the 10 million user mark, tripling the number of adoptees in less than a year while remaining the top fitness app. top rated on multiple mobile platforms. To celebrate, Endomondo will be offering the PRO version of its app for just $ 1 from June 27 to July 1.

Mette Lykke, co-founder of Endomondo, said the ever-increasing adoption of the company’s mobile app can be attributed in part to the social nature of the service. She said a perfect example of this is the fact that since launching its Facebook Timeline capability earlier in 2012, Endomondo has seen Facebook traffic increase by over 150% and around 50,000 workouts are now shared on a daily basis on Facebook.

“Our mission is to make fitness fun by making it more social and more engaging,” Lykke said. “Most of our users find it motivating to connect with their friends, family and colleagues around fitness. Users can give pep talk to each other, comment on each other’s workouts, and challenge each other. The fact that our service becomes more motivating with the number of friends you have is a key factor in the growth rate of Endomondo, which currently reaches over 20,000 new users per day.

The Endomondo Sports Tracker is a free mobile app that turns GPS-enabled smartphones into a personal trainer and social motivator capable of tracking workouts, analyzing performance, and helping to discover activities and fitness information. Endomondo sets itself apart from other activity tracking apps by its emphasis on the social dimension of fitness. By incorporating unique social aspects, Endomondo connects fitness fans locally and around the world. Users can send their friends real-time cheering chats while they exercise, compete virtually against friends for fun, and share it all on Facebook, Twitter or the Endomondo social network.

Endomondo is backed by Danish SEED Capital and a handful of private investors. The company has raised $ 6.2 million to date. For more information, please visit http://www.endomondo.com and follow Endomondo on Facebook.

Founded in 2007 by fitness enthusiasts, the Endomondo Sports Tracker mobile app uses GPS technology and records a complete workout history for remote activities. Additionally, the Endomondo.com app and website provide users with a personal portal to connect to the Endomondo community. Available on seven mobile platforms, Endomondo works on almost all GPS phones.