Notably, macOS Monterey 12.3 includes support for Universal Control, the long-awaited feature that lets a single mouse and keyboard control multiple Macs and iPads. To use Universal Control with macOS Monterey and iPad, all connected devices must be running macOS 12.3 or later, and iPadOS 15.4 or later. The feature is enabled by default.

Always back up the Mac with Time Machine before starting any system software updates. 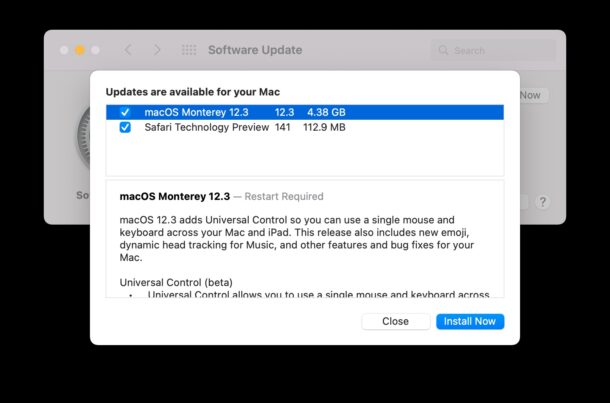 Mac users who are not yet running Monterey but are instead running an older version of system software like Big Sur or Catalina will find a security update and Safari updates available.

Mac users can download the full macOS Monterey 12.3 installer directly from Apple, if they wish:

Note that the full package installer is not a combo update or a delta update, which apparently were deprecated with Monterey.

The release notes attached to the update are as follows.

macOS 12.3 adds Universal Control so you can use one mouse and one keyboard on your Mac and iPad. This release also includes new emoji, dynamic head tracking for music, and other features and bug fixes for your Mac.

This release also includes the following enhancements for your Mac:

This release also includes bug fixes for your Mac:

How do I enable universal control?

On macOS, Universal Control can be enabled by going to  Apple Menu > System Preferences > Displays > Universal Control > and checking the box for “Allow your cursor and keyboard to move between any nearby Macs or iPads”.

Universal Control is enabled by default on the iPad, but the settings toggle is in Settings > General > Airplay & Handoff > “Cursor & Keyboard (Beta)”.

Remember that Universal Control requires all eligible devices to be running macOS 12.3 or later, or iPadOS 15.4 or later.

Assuming all devices are running the latest versions of system software, you’ll find the Universal Control settings on the Mac in System Preferences > Displays, where you can adjust feature settings, as well as screen orientation.

Separately, Apple has released iOS 15.4 for iPhone, iPadOS 15.4 for iPad, along with updates for watchOS and tvOS.