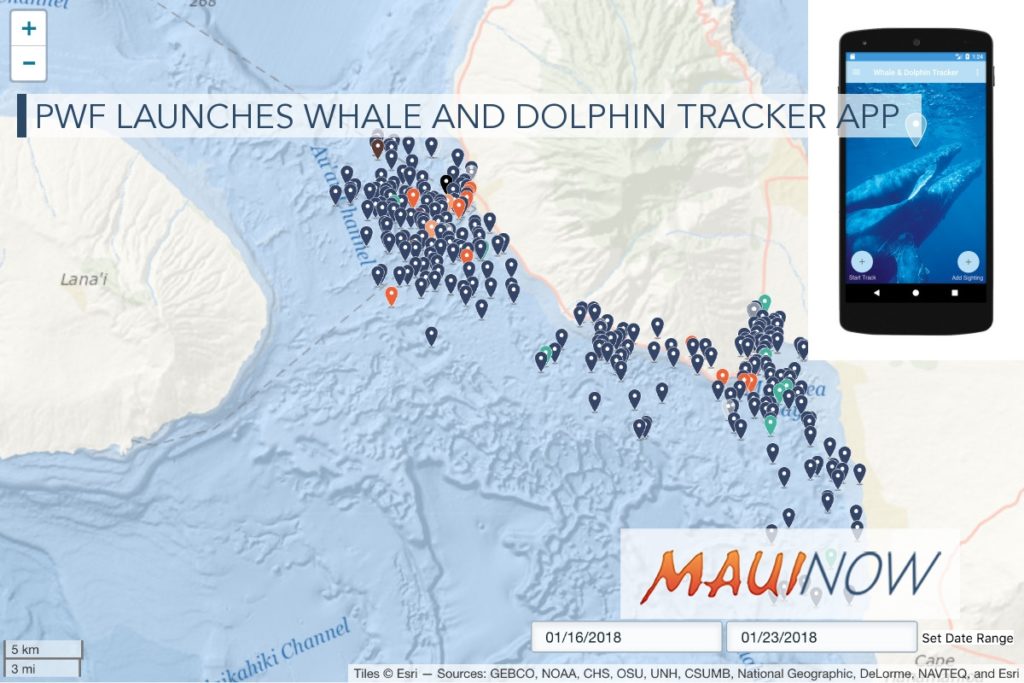 The Pacific Whale Foundation has released a Whale and Dolphin Tracker app which is now available for download on the App Store and Google Play. The app is free for iOS and Android mobile devices.

The app was developed by PWF researchers in partnership with International Underwater Explorations, a geospatial information systems company that merges real-time data from a wide range of sources.

With the app, users can record their vessel’s GPS track and marine wildlife sightings, including GPS position, group dynamics, observed behaviors, photos and other data, directly from their phone . This information is uploaded in real time and added to a global research database.

“We are delighted that members of the public can use Whale and Dolphin Tracker to participate in our research as citizen scientists from anywhere in the world,” said Jens Currie, PWF Senior Research Analyst. “Their contributions will help us and other researchers track and monitor cetaceans, determine species distribution patterns, build life histories of individual animals, and study their interactions with the environment. “

Whale and Dolphin Tracker was originally designed and built as a web application in 2010 to allow marine naturalists at PWF to collect research data on the distribution and activities of whales and dolphins in the region surrounding Maui, Lānaʻi, Molokaʻi and Kahoʻolawe.

THE ARTICLE CONTINUES UNDER THE AD

An interactive map of live sightings on the Pacific Whale Foundation website displays all sightings recorded by Whale and Dolphin Tracker over the past seven days. A similar map for Hervey Bay is available during Australia’s whale watching season (July to October). Viewers of both can use species and date filters to see changes throughout the year. A successful fundraising campaign in 2016 provided the funding needed to bring the web application to mobile platforms.

THE ARTICLE CONTINUES UNDER THE AD

“Currently, the live sightings map is focused on tracking data collected during our ocean ecotours which are used as platforms of opportunity to collect additional sighting information,” Jens said. “Now that more users will have access to Whale and Dolphin Tracker directly from their phones, our crowdsourcing capability and geographic coverage will expand, as will our knowledge of whale and dolphin distribution.”