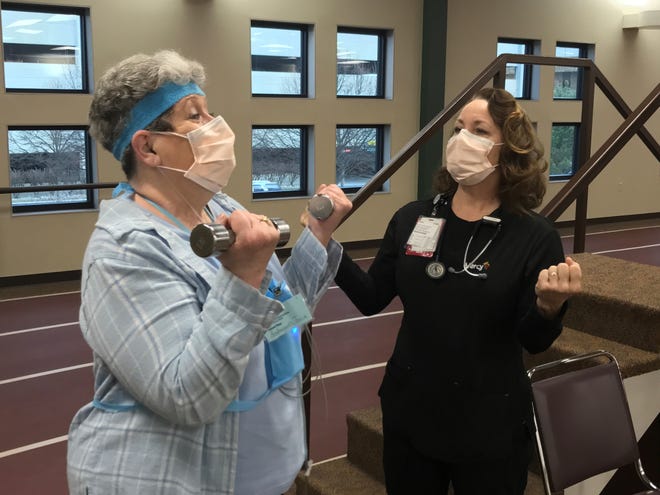 Janie Pendergraft sports a smile that is apparent even behind her face mask. Her eyes light up as she shares her story of recovery and her hopes for her future.

A year ago, Pendergraft was desperately trying to get a COVID-19 shot when she started feeling sick. On Sunday, February 28, after suffering from a sore throat, cough and high fever, she rushed to emergency care where she was diagnosed with COVID-19. They sent her home advising her to go to the emergency room if she started having trouble breathing.

Eight days later, on March 8, she went to the emergency room. While there, she received dexamethasone and remdesivir. Three days later, she received convalescent plasma. Nothing helped, because it kept getting worse. She developed pneumonia and was put on a ventilator.

It was then that he was advised to “say goodbye” to his family. Calling her sons was one of the hardest things she had to do.

“I was so scared,” she admits. “I couldn’t have visitors. I had no one to hold my hand and comfort me.

So she told her sons that they were her greatest joy and that she was trying to do her best as a mother. “They said I was the best mother.”

Her son Jeff Pendergraft, who lives in Neosho, admitted the call was “a little scary” but he always believed she would pull through. “She’s a pretty tough woman.”

His son Mike Pendergraft was all the way to Canon City, Colorado.

“Being in Colorado was really tough,” he said. “I had to call every day and depend on what other people were telling me.”

He was finally able to see her for himself after she was transferred to a rehabilitation hospital, but at some point he was making plans for the last time he would see his mother.

On March 23, Janie Pendergraft was placed on life support.

“My sister-in-law now calls me Lazare,” she jokes.

For Pendergraft, disappointments and struggles are just foils to his natural optimism. Today, she is quick to praise his medical care, family support, maps and prayers from friends.

“I don’t know why I was spared,” she says in a moment of retrospect. “There is always hope.”

Hope and prayers have kept Pendergraft’s spirits up, but she points to medical teams at Mercy Hospital Springfield and Select Specialty Hospital and an incredible machine that kept her alive for a record number of days while her body was fighting the virus and its consequences.

“I owe my recovery to God and a lot of doctors,” she says. “They made good decisions. They know more about COVID treatments.

Pendergraft talks about the use of ECMO – extracorporeal membrane oxygenation. The ECMO machine pumps the patient’s blood outside the body to a heart-lung machine that removes carbon dioxide and returns oxygen-filled blood to body tissues, according to the Mayo Clinic website. Blood flows from the right side of the heart to the membrane oxygenator of the heart-lung machine, then is warmed and returned to the body.

Until COVID-19 hit, ECMO was mainly used for infants and heart transplant patients. Mercy Hospital Springfield is the only ECMO center in the area to use ECMO as part of its cardiovascular medicine program. In fact, there are only 11 ECMO centers in Missouri. In addition to five in St. Louis and three in Kansas City, only Mercy Springfield, Freeman Health System in Joplin, and the University of Missouri in Columbia have ECMO teams.

Dr. Madhu Pendurthi, a pulmonologist and intensive care specialist, is part of this team in Springfield. He loves talking about Pendergraft and his incredible recovery.

When she walked into Pendurthi’s office recently, he pulled out his phone to text the ECMO team in St. Louis to tell them about his recovery. “You don’t know what a miracle you are,” he told her.

Pendergraft’s extraordinary recovery has also provided many insights for physicians working with ECMO. Use of the treatment for COVID-19 patients was immediately considered when the pandemic began, but it was not until around August 2020 that standardized treatment was established. With each variant of the disease, there are subtle differences in how it manifests and how it should be treated.

The Mercy ECMO team is part of the Extracorporeal Life Support Organization – ELSO, an international non-profit consortium of healthcare institutions and researchers. The data is collected from the ELSO website, which also publishes studies and results of the use of ECMO on COVID-19 patients. These studies have shown that many people do not survive, but more and more people do.

Pendergraft is one of them, but the decision to put her on ECMO was not easy. When she went into acute respiratory failure, conventional medical intervention had already been exhausted. At 65, she was at the top of the age bracket, but because she was otherwise healthy, the team hoped for a good result.

She remained on ECMO for the next 34 days, a record for Mercy Springfield. During this time, she had to be placed in a drug-induced coma. She was also at high risk for infections, blood clots, muscle weakness – all she experienced.

“It’s a miracle because she went through all that and walked into my office,” Pendurthi says, adding that successfully completing rehab was daunting even after surviving the treatment.

At the time, Pendergraft was the fifth COVID-19 patient put on ECMO at Mercy Springfield and only the third to survive the ordeal. Larry Krauck previously held the record, with 32 days on ECMO.

Krauck called Pendergraft to congratulate her on breaking her record. Although he didn’t have as many medical issues, Krauck says he had a lot of trouble rehab because of his immobility. He suffered from neuropathy, frozen shoulders and more after being in bed for so long.

“Through it all, I became a case study,” he says, explaining that because of his experience, Pendergraft received physical therapy while on ECMO.

The physiotherapy team and the ECMO team have since developed a protocol for having the person walk on ECMO, Pendurthi says. Other techniques are also under development.

Although ultimately successful, Pendergraft’s time on ECMO was also busy.

“If anything could go wrong, it did,” she recalled. But things also went surprisingly well.

Her ECMO machine started having problems after about a week. But a spare machine was available, so she was moved there. Her sons have been warned that she may not survive the change. But she did.

She experienced fascinating hallucinations, including a room full of cats and a 19th century scene with a little lady doing quilting.

“None of it was scary,” she adds quickly. “I wondered if I had crossed between the living and the dead.”

“Attitude is so important”

When Pendergraft woke up, she could not speak or walk. Doctors warned her that she may never do either again. She was able to use a whiteboard, but even holding the marker was difficult. Later, a tracheotomy was performed and a larynx put in place for a few weeks.

“For a while I was depressed and wondering why my family let me wake up,” she admits. “But it didn’t last long.”

Living through her ECMO experience, Pendergraft remembers fear, anxiety and confusion, but determination and her own positivity quickly returned once she began the heartbreaking next step in her journey to recovery. – rehabilitation.

She was transferred to Select Specialty Hospital in May, unable to walk. While there, she developed pneumonia, gastrointestinal bleeding, blood clots and collapsed lungs, which is not unusual for a COVID-19 patient who has been on ECMO, according to Dr. Brent Bergen, director. physician and pulmonologist at Select.

“Attitude is so important,” says Bergen. “Recovery is really about the patient.”

Bergen has seen several ECMO patients since the start of the COVID-19 pandemic, several from St. Louis. Most, however, were much younger than Pendergraft, so he saw challenges to his full recovery, he admits.

Pendergraft didn’t let him down. When she left Select a month later, she continued her recovery with home health, walking to a neighbor’s house and back, then graduating from Mercy Rehabilitation Center, where she walks two miles on the track. She has just entered the next phase of rehab and still hopes to one day be able to give up her oxygen machine. Dr. Pendurthi thinks she will.

“I’ve always been an optimistic person,” says Pendergraft. But it is also realistic. She acknowledges that she may still need oxygen. “But that’s not a game-changer.”