Shark, anywhere in the world, and in real time. Fun, isn’t it? Image: shark tracker

Sharks are endlessly fascinating. They can be terrifying, although most of our fear is unfounded. We’ve been studying them for decades, and there’s still so much about them that we don’t know. How do they navigate? How many species of sharks are there really? How to correctly measure their intelligence? So many unanswered questions, so little time. But there is at least one way to get some answers: a shark tracking app made by OCEARCH.

OCEARCH, a “data-centric organization designed to help scientists collect data previously inaccessible in the ocean,” created the app so interested users can stay up to date with their favorite sharks in real time on the go. any mobile device. This morning at 6:31 am, for example, an eight-foot Mako named Fast Ball was swimming in the Gulf of Mexico, just off the Mexican border a stone’s throw from Brownsville, Texas. And it’s clear from the comments that there are more than a few very interested users – Sharks have some great fans.

One of the coolest parts of the Shark Tracker app is the ability to comment on and follow any of the 324 sharks tagged into the system. There are alligators, seals, turtles, and dolphins on the app too, and the reviews on each one are hilarious and heartfelt.

“I jumped to use a straw for you today, honeybuns,” one user wrote about a turtle named Junonia.

“I would die for Fast Ball,” wrote Chloe W. 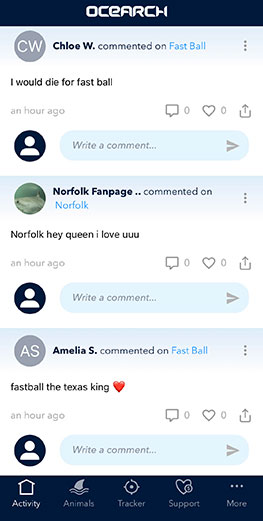 Each animal on the app has a detailed bio, including estimated weight, where they were tagged, last location, a movement log from when they were first tagged, and a photo in profile. Whether you’re here to stay away from sharks or just love sharks, Shark Tracker is a fun way to keep up with some of your favorite sea creatures.

The app can be found here.