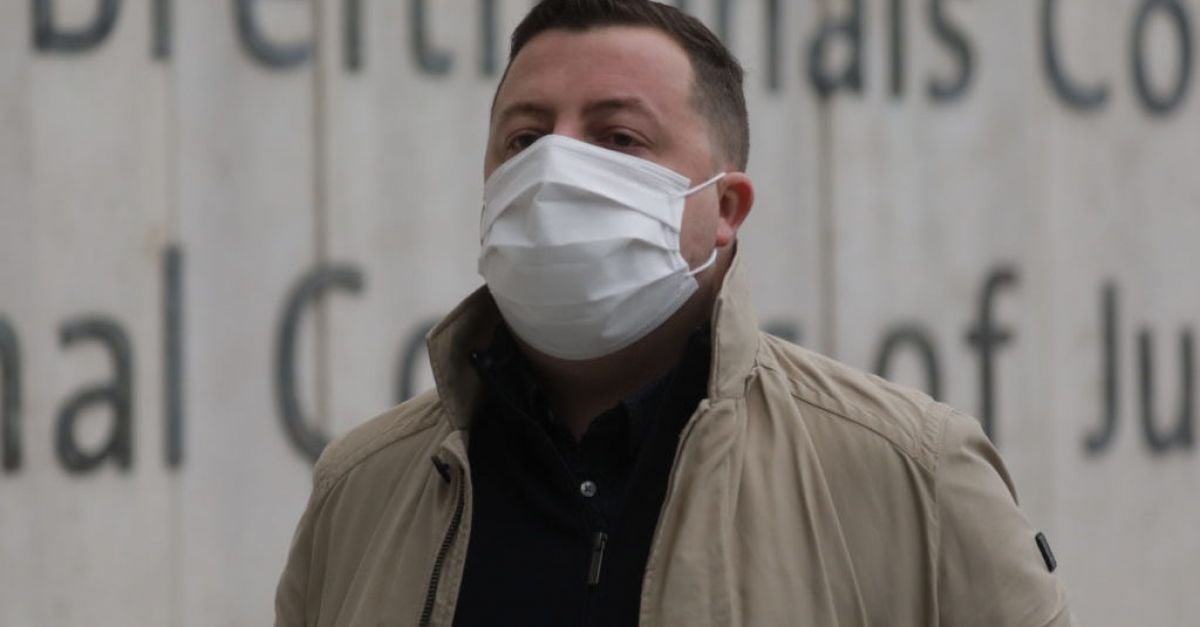 Last November, in court without a jury, Douglas Glynn changed his guilty plea, just over a week after he was tried and admitted to placing a tracking device on Gately’s car.

Gately had been warned by Gardaí of a threat to his life from criminals who believed he was involved in the murder at the Regency Hotel of Kinahan Cartel associate David Byrne in February 2016.

The court has heard in previous related cases that there was “continued targeting” of Gately in the context of a feud between the Hutch and Kinahan crime groups. Estonian hitman Imre Arakas was brought to Ireland in 2017 to carry out Gately’s murder before being apprehended by Gardaí.

He said Gately was “the target of the Kinahan organized crime group at the time.”

Glynn (37) of Fitzgibbon Court, Dublin 1, was re-charged on November 17, 2021 and pleaded guilty to participating in the activities of a criminal organisation, contrary to Section 72(1)(A) of the criminal justice. When first arraigned on Nov. 9, Glynn pleaded not guilty.

The particulars of the accusation are that on dates between December 7, 2016 and April 6, 2017 inclusive, both inside and outside the State and having knowledge of a criminal organization and with the intent to enhance the ability of said criminal organization or any of its members to commit a serious crime, namely the murder of James Gately, Glynn participated in or contributed to activities related to said crime.

Detective Sergeant O’Leary said Gardaí did not know who the target was until April 2017, and it was not until Arakas arrived in Ireland on April 2, 2017 that Gardaí became aware that the plan was to assassinate Gately.

Arakas (63) was jailed by the Special Criminal Court for six years in December 2018 after admitting conspiring with others to murder Gately in Northern Ireland between April 3 and 4, 2017.

The witness said Friday that Gately was a senior member of a rival criminal organization.

During the investigation Gardaí knew someone would be arriving in Ireland and Arakas was followed by members of the unit and followed to Dublin City.

He was later picked up by a man driving a white Mercedes van and taken to Blakestown Cottages, Clonsilla, Dublin 15, where co-defendant Stephen Fowler lived.

Fowler (62), of Blakestown Cottages in Clonsilla, Dublin 15 has previously been jailed for providing logistical support to the plot to assassinate Gately.

While walking around town, Arakas purchased items for his role as an assassin, including a disguise, and was also observed in an area of ​​town where Gately may have been hanging out.

After observing where Ararkas went, a search warrant was obtained for Blakestown Cottages on April 4, 2017, and Gardaí found Arakas and Fowler at the scene.

A Blackberry device was found in Arakas’ possession and an open message thread referring to Gately’s murder planning was found.

The message thread was remotely deleted after being photographed on the Blackberry device.

A note was also found next to Arakas which was written in Estonian, but with the words “James Gately, Dublin criminal” written in English.

Additionally, there was information about the geographical features of where Gately lived in Belfast and a reference to a gun using the code word ‘dog’.

Detective Sergeant O’Leary said it became clear that it was intended that Gately should be assassinated and armed with this information, gardaí liaised with police in the North.

In April 2017, Mr McGinn said Gately was driving a Toyota Avensis which had been fitted with a secret tracking device. The court heard he was planted on his car on March 30.

Gardaí was then able to “assemble” various incidents over the previous months when similar tracking devices had been fitted to other cars associated with Gately.

These tracking devices were made by a British company called GoTEK7.

Detective Sergeant O’Leary said the information was downloaded from the devices and cross-checked with information held by the parent company to provide insight into where the devices were at any given time.

Last September Keating (40) of Rowlagh Green, Clondalkin, Dublin 22 was jailed for 11 years after pleading guilty to directing the activities of a criminal organization between December 7, 2016 and April 6, 2017, at in and out of state regarding the targeting of Gately.

The court heard on Friday that CCTV footage showed the Peugeot driving to the Gately apartment complex and that Glynn had attempted to gain access to the premises.

Glynn was unable to gain access as he was stopped by an employee in the underground parking lot and was escorted out of the area.

The Peugeot then entered the parking lot when another vehicle pulled out of the complex.

Detective Sergeant O’Leary said Glynn got out of the Peugeot and went to Gately’s Toyota to install the tracking device.

Glynn wore a hunting cap with ear flaps at the time. After deploying the device, the Peugeot car with the three occupants returned to Dublin.

On April 5, the Peugeot was stopped with another man driving.

The following day, Glynn and another man, who had brought the tracking device to Ireland, took a ferry to the UK.

On April 11, Glynn’s residence in Ashtown was raided and five Blackberry devices were located. A serial number indicated that they were all from the same batch.

Gardaí learned that Glynn had used a code name “Oscar” and it became apparent that a number of March 29 phone messages by that name referred to a hunting hat with ear flaps.

Detective Sergeant O’Leary said there was an exchange between ‘Oscar’ and another person about getting a tracker on a car belonging to Gately’s sister on January 16, 2017, which which was consistent with installing a tracker on his car the next day.

“Oscar” also asked about the seizure of tracking devices by Gardaí on February 23, 2017.

Detective Sergeant O’Leary, heard by the court, placed Glynn “slightly above” David Duffy and Fowler in the criminal organization.

Duffy (33) from Greenfort Lawns, Clondalkin, Dublin 22 has previously been jailed for providing logistical support to the plot to assassinate Gately.

Glynn has 16 prior convictions, mostly for minor traffic offenses and one for drug possession for sale and supply.

By way of mitigation, defense attorney Shane Costelloe SC asked the court to consider that his client was well integrated into society, had three children and was heavily involved in caring for his two elderly parents.

“He is a man who has prospects when he finishes his sentence,” he added.

Presiding Judge Tony Hunt remanded Glynn in custody until February 11, when he will be sentenced.

In his opening speech, Mr McGinn said the evidence in the case against Glynn was “circumstantial” in nature involving CCTV, photograph, mobile phone, tracking device, fingerprints and evidence of observation of Garda.

Glynn is the fifth man to be convicted in cases relating to the failed assassination attempt on Gately in Belfast.

Video: Investigation into the murder of Ashling Murphy…

In another assassination attempt, Gately survived being shot five times while sitting in his car at the then Topaz petrol station on Clonshaugh Road, north Dublin on May 10, 2017.

In February last year, Caolan Smyth (30) of Cuileann Court, Donore, Co Meath, was sentenced to 20 years by the Special Criminal Court for attempted murder of Gately and possession of a firearm in the intent to endanger his life. Smyth had denied both charges.

Gary McAreavey (53) of Gort Nua, Station Road, Castlebellingham, Co Louth, had pleaded not guilty to acting to prevent arrest or prosecution by buying petrol and helping to burn the vehicle, a black Lexus , used in the attempted murder at Newrath, Dromiskin, Co Louth on the same day.

He was sentenced to four years in prison, suspended for the last year.